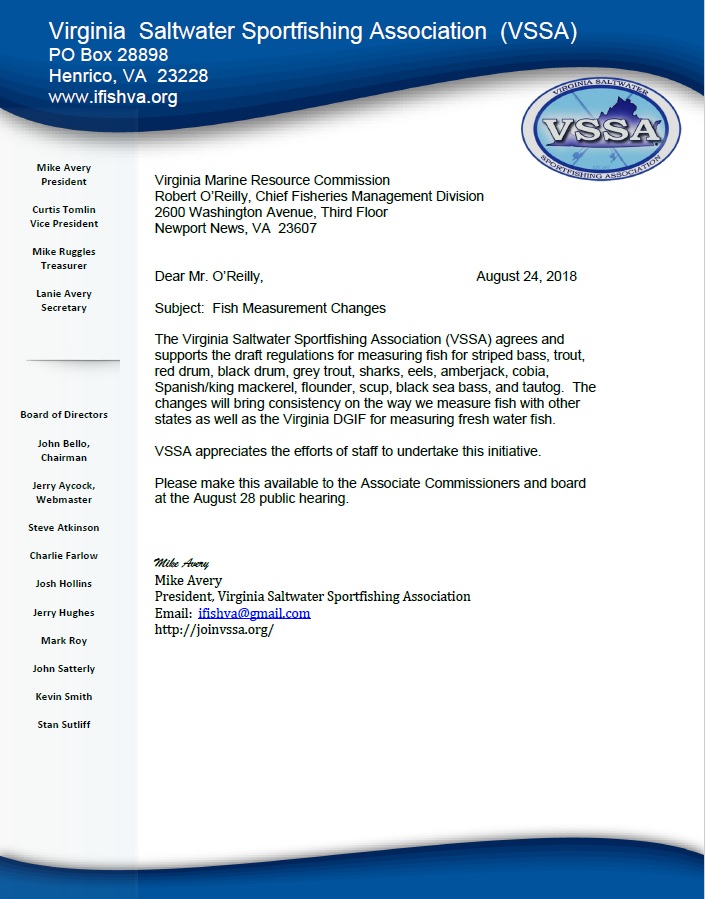 August 13, 2018.  Fish measurement is confusing in Virginia particularly for rockfish.  While this may not be a huge issues for anglers, VSSA surveyed anglers and most anglers are not aware of the exact process Virginia uses to measure saltwater fish.  Most anglers just use overall total length.  Most other states including Virginia for fresh water measurement use total length.  In Virginia, we are expected to try to find the nose of the fish and start the measurement from there.  Some fish have the nose (or nostril) behind the mouth or snout.  Anglers have gotten themselves in a little trouble during striped bass season where our fish has to be 19 inches and there are so many just under 19 out there.  Here is what the current guidance from VMRC states which does not allow squeezing the tails together:

Current regulations:   Size limits are total length measurements; fish must be measured tip of nose to tip of tail, except black sea bass, which are measured from tip of nose along the centerline of the body, to the center of the tail.

Proposed regulations:  “Total length” means the length of a fish measured from the most forward projection of the snout, with the mouth closed, to the tip of the longer lobe of the tail (caudal) fin, measured with the tail compressed along the midline. It is a straight-line measure, not measured over the curve of the body.  (“Snout” means the most forward projection from a fish’s head that includes the upper and lower jaw.)

This new wording will be inserted into each individual fish regulation.  The only modification will be for black sea bass which excludes the long strand called the tail filament.

VMRC public hearing on this new wording will be August 28, 2018 at the August VMRC Commission meeting.  Comments should be sent to Rob O’Reilly, email:  rob.o’reilly@mrc.virginia.gov not later than noon 12 pm Monday, August 27, 2018.  Or you can show up the commission meeting to make your comments directly.

VSSA is recommending we accept this new wording.  VSSA brought this issue to VMRC which was raised by our affiliate club member, Northern Neck Anglers Club, who some members had issues with VMRC law enforcement last rockfish season.  VSSA has worked with VMRC on the wording so we will have regulations common with other states, just go to total length overall and allowing the pinching of the tails.

Virginia Saltwater:   Size limits are total length measurements; fish must be measured tip of nose to tip of tail, except black sea bass, which are measured from tip of nose along the centerline of the body, to the center of the tail. 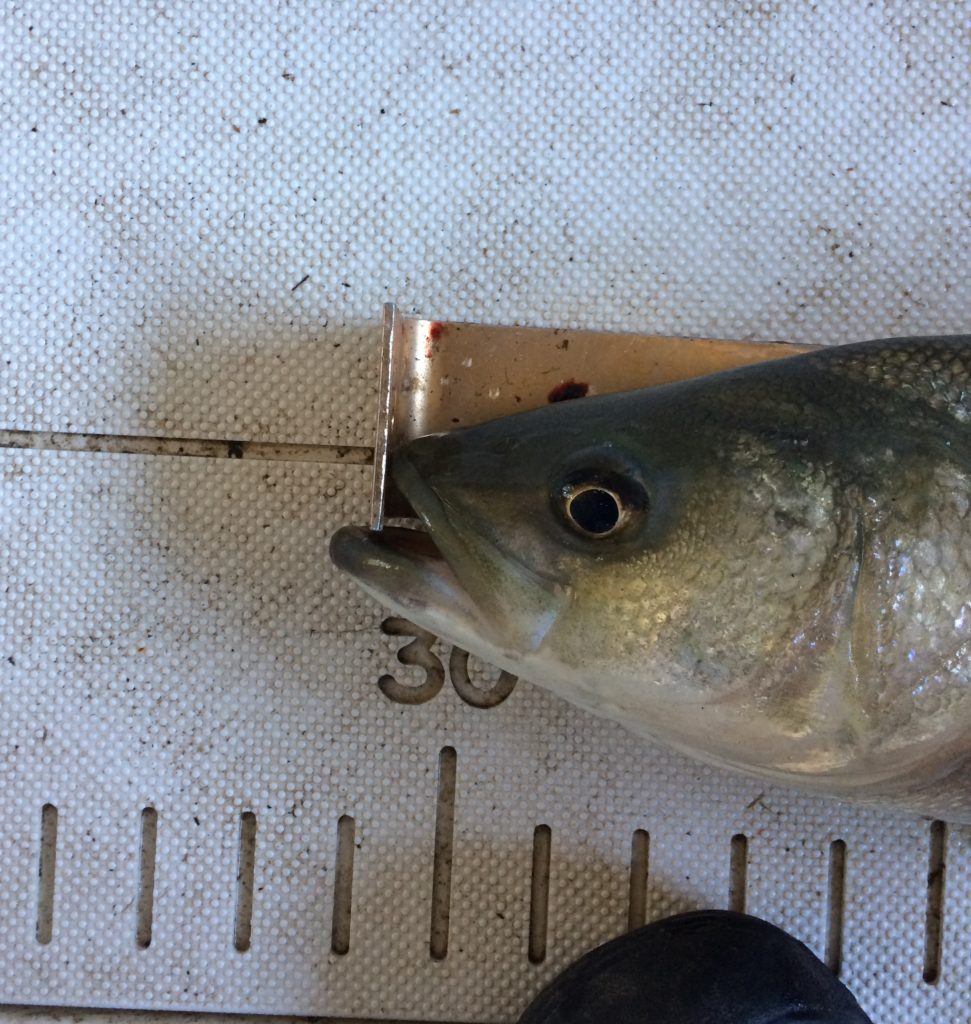 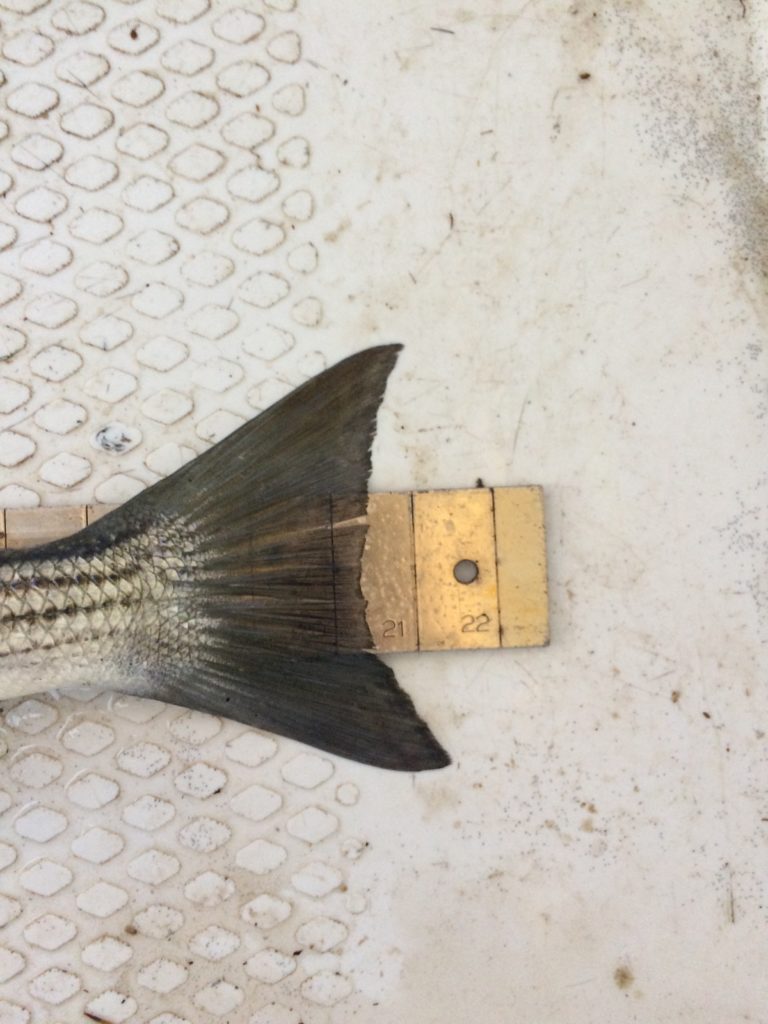 Florida: Total Length is measured from the most forward point of the head, with the mouth closed, to the farthest tip of the tail with the tail compressed or squeezed, while the fish is lying on its side. 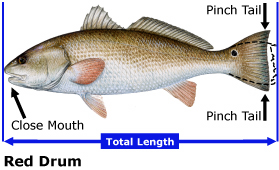